I'm working on an internal app for our company built with Angular; let's call it JobSearch. As soon as I took over JobSearch, the automatic deployment from GitHub stopped working, as if my magic. And by magic I mean, "F#$2 you, Adam."

Through a rather unfortunate series of events, I don't even have access to the deployment or said logs. The only clue I had was this:

When I merged updates, the Angular templates would change, but not the new controller code.

In order to fix the bug, I figured I would need access to the deployment logs. It was the last assumption that I couldn't test locally. After deploying as skeleton version of my app to my own Azure account, I found the bug: multiple bower dependencies needed different versions of Angular.

Not reading too closely, I selected a resolution for Angular 1.3.8 and saved it to the bower.json file.

For the first time in three weeks, deployment was working again. 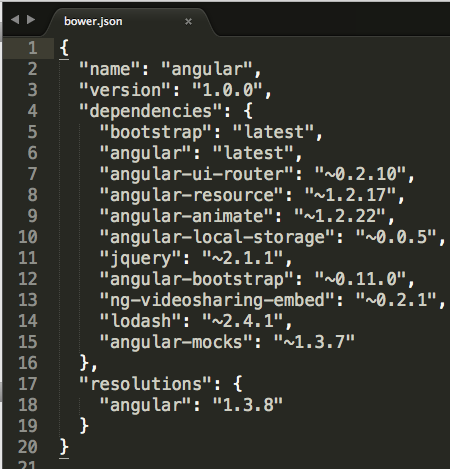 Do a little happy dance.

The team which uses JobSearch found that they could not longer invite users to use the app. That's a huge problem, because there is no sign-up; it's by invitation only.

If that worked, this wouldn't be a blog post.

After merging that commit, the site redeployed, but had the same issue.

Using Azure's visual studio online, I could see that the bower file has indeed updated to the correct resolution version.

However, the version of Angular in the bower_components directory was still 1.3.8.

On deployment, Azure runs bower install, but says, "Hey, I already have Angular. I shan't download another," despite the resolution addition to the bower file.

I manually edited the bower.json resolution to 1.2.28 locally and tried bower install.

Nothing. Like I never changed the resolution. I still had Angular 1.3.8.

I needed to force Angular to update to the correct version on Azure. Here's what I tried:

Let's think: how did I solve this locally?

I deleted the bower_components directory and reinstalled everything using bower install.

Thanks to Andrew Teich and a single line of bash scripting, we changed the deployment file to do just that.

Then, bower install starts everything fresh!